In the fall of 1976, America’s bicentennial year, I was in the midst of moving from my rent controlled apartment in Manhattan’s East Twenties to a farm in the tiny hamlet of Krumville, about ninety minutes north of the city.  During the first week in September, my girlfriend Harriett, myself, my dog “Miss Coney Island”, and our three cats – Spiegel, Fatty, and Rose, all squeezed into the confines of a U-Hall truck, and made the trek to the foothills of the Catskill Mountains. I had made arrangements for our two horses to be shipped from the barn in New Jersey, where we boarded them, and delivered to the farm the following week. Before the unpacking even began, the phone rang. It was Sid Levine from Star Distributors. He needed to see me right away, very important, couldn’t wait. So I left the unpacking to Harriett, got in the car, and made the drive back down to the city.

Star Distributors, my main source of income in those days, was the porno unit of the DeCavalcante crime family. In the beginning, I only dealt with Sid Levine, but after three years I had become Star’s largest single supplier of feature product and, one by one, the major players revealed themselves to me. Robert (Dibi) DiBernardo, a Capo in the DeCavalcante family, was the boss. Teddy Rothstein and Andrew (Andre) D’Apice worked under him, and each of them handled a different part of the business. I guess, for legal reasons, they were seldom seen together in public, and even had offices in different buildings. Two of these buildings, where Dibi and Andre rented space, were owned by the husband of Geraldine Ferarro, a fact made public when she ran for Vice President. By now, my presence was so familiar that, often when Sid called me down for a meeting, Andre, or even sometimes Dibi himself, would stop by to say hello. These guys were not cowboys. Dibi was a well dressed, soft spoken, polite businessman, and he ran Star that way. When I first found out that I was dealing with the Mafia, I have to admit to a few anxious moments, but my fears evaporated quickly. I was a rare commodity in their world, a completely dependable supplier. They needed me, and acted accordingly. They were not the violent end of the Cosa Nostra, they were businessmen. In all the years I dealt with them there was never a problem. They paid promptly for a product that was delivered on time and on budget. The danger of dealing with gangsters, which both scared me and thrilled me, never really materialized. At least not yet.

Sid was looking grim when I got to his office, and he didn’t waste any time. “Look, I’m a grandfather and I’m ashamed to have to ask you this, but they need an enema movie.” I didn’t want to break the mood so my inner chuckle never surfaced, but it was close. An enema movie????? Sid had been given an audio cassette recording of something called “The Enema Bandit”, which had a scene in which an effete Doctor, assisted by an evil nurse, gave an elaborately staged enema to a bound and gagged young girl. On the tape, he announced that he was going to use a device called the Bardex Inflatable Nozzle. So I’m thinking that this just might be the funniest single thing I’d ever heard, but of course I didn’t tell this to Sid. Evidently this idea came from a magazine article, alleged to be a true story, about an enema fetishist who went on a cleansing spree on the campus of the University of Illinois at Urbana, and forcibly administered enemas to coeds. He was convicted on felony assault charges and was presently serving out his sentence at their state penitentiary. Because no actual rape had been involved, only a cleansing procedure, a kind of celebrity status was claimed by the “Enema Bandit’s” victims. Hoping to be interviewed by the press, co-eds left their dorm room doors unlocked, in order to make the notorious “Bandit’s” enema spree easier for him. After all, it was only water. 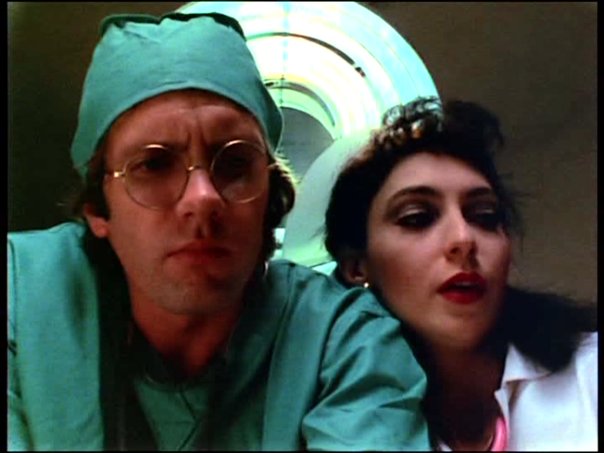 The answer print of “Waterpower” was never seen by Sid Levine, Dibi, or anyone else at Star Distributors. I simply described it over the phone to Sid, who whispered, “What do you think? Is it good? Don’t let me down now”. I told him it was fine. That he was getting what he asked for. So an embarrassed Sid Levine called the lab, and made the release print order, and a film that none of them had ever seen went into distribution.

“Waterpower” opened to empty houses wherever it played. Theater owners were scared of it, and audiences didn’t know what to make of it, and I was not   surprised by either. I had seen Scorscese’s “Taxi Driver” just before Sid asked me to make the picture, and thought that my friend Jamie Gillis would make a great Travis Bickle, only on foot, prowling Manhattan’s jungles, looking for evil bitches to cleanse. I used Taxi Driver’s diary voice-over narrative, and even some of Bernard Herrmann’s music score. Stealing music was one of my specialties, and I never got caught. Dibi had said to me, “Just make the thing”, and that’s exactly what I did. Since I would be making this movie without parental supervision, I was free to turn it into a parody of itself. I wrote a ludicrous script, hired my favorite actors; Jamie, Marlene Willoughby, and Rob Everett, and went about shooting what I still think is the funniest movie I ever made. Of course, there was always the chance that Dibi and the boys Downtown would catch on to what I was doing, and I would sleep with the fishes, but I didn’t think so. I had long-before made a friend of living with risk, and with “Waterpower” I was willing to go the distance.

The edited negative that I delivered to Guffanti Film Labs was 71 minutes long, 70 being the minimum length for a feature film in distribution on the Porn Circuit in those days. I shot the picture on 16MM film, in four days, for a total budget of $16,000. Post production took another six weeks. Delivering a watchable 71 minutes for only $16,000 was impossible, but I was satisfied if I could get away with a scene or two that somehow worked from beginning to end. I had written some deliciously absurd dialogue, and Jamie, Marlene, and Rob did wonders with it. Jamie’s reading of the “Bandit’s” diary narration may be the best piece of acting he ever did.

After two years in distribution, and not having even recouped its meager negative cost, Waterpower was shelved, until somebody at Star Distributors came up with the questionable idea of re-releasing the picture under a different director’s name. While Cosa Nostra families had their differences, sometimes violent, the enormous profits that they shared from organized crime’s huge involvement in pornography went smoothly. By 1978 the DeCavalcante family’s porn interests had been merged with the Gambino’s, creating an international empire of smut. The Colombo family’s profits from pictures like “Deep Thoat”, and “The Devil in Miss Jones”, both made by director Gerry Damiano, were gigantic. It was well-known that Damiano was wholly owned by the Colombo’s and did what he was told, and my old friend Dibi, now a Gambino Capo, was certainly aware of the huge profits that Gerry’s two movies had made for the Colombo family. This was the era of “Porn Chic” in New York City, and Damiano had made the television talk show circuit, and his name had become known to the public. Robert “Dibi” DiBernardo, representing DeCavalcante/Gambino interests, made the request to the Colombo family to borrow Damiano’s name, in order to insert it as the Director’s credit, on the re-release of the so-far unsuccessful “Waterpower”. Dibi now had a semi-famous director’s name for his enema epic, but he didn’t stop there. He ordered the people at Star Distributors to dip into the out takes and add 15 minutes to the length of the picture. This was a common practice in those days. If a picture didn’t work at 71 minutes, re-release it at 86 minutes, and hope that the increased length will make the difference at the box office. Of course, it didn’t.

Waterpower was unwatchable at 71 minutes, and was now unthinkable at 86. Scenes that I had left on the editing room floor because the acting was so atrocious were now re-inserted to make the film longer. These guys were not rocket scientists. They thought that Damiano’s name, and the new, hideous length would do the trick. It didn’t.

Thirty-three years after I made it for Sixteen Thousand Dollars, “Waterpower” has developed a world-wide cult following. Robert “Dibi” Diberdardo was shot in the head in 1986 by Gambino hit man Sammy “Bull” Gravano, and died, as far as I know, never having seen his enema epic.  I saw a recent French DVD release of the picture, which was transferred from good source material. The picture quality was acceptable, considering its age and, while unwatchably long, it still had its moments.  Marlene Willoughby’s engaging habit of raising her left eye brow when making a conversational point was as hilarious as ever, and Rob Everett was as funny as I remembered. And Jamie – well I guess Jamie will always be either cursed, or blessed, as being forever remembered as Burt, the Enema Bandit. As for me, I have to admit to a chuckle or two, while watching some of the dialogue. After all – it’s still the funniest movie I ever made.