In scanning the overwhelming response, in newspapers across the country to the death of  Barbaro, I am stunned by the idiotic sentimentality displayed by an ignorant public that, not once, seems to have taken the ordeal of this horse into consideration. On the third Sunday of May 2006, in front of a horrified public, a 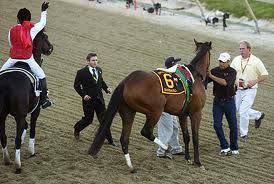 thoroughbred horse known as Barbaro suffered a fatal injury while running in the Preakness Stakes, a race he was favored to win. I have owned horses a good part of my life and can tell you that no horse recovers from this serious an injury.

A combination of this preposterous sentimentality, and a veterinary team looking to make a name for itself, (no matter how sincere they appear) caused this horse to endure an agonizing and

needless eight months in hopeless recovery-limbo, instead of the quick, painless, and humane end it deserved.

The great filly “Ruffian”, who suffered a similar injury, in a similar situation, was euthanized on the spot at Belmont Park, back in the Seventies which, I guess, was a more merciful and sensible decade.

Barbaro endured a shameful eight months, during which ruthless cottage industries sprang up all over the country, making

scandalous profits on the agony of an animal. The greeting card industry pitched in with, “Get Well Soon Barbaro” cards, bought by parents, signed by children, and sent where, exactly? To the veterinary barn, where a suffering thoroughbred adjusted his reading glasses and scanned the literary endeavors of his fans? Dishes, statuettes, framed photographs, were all adorned

with a likeness of the suffering animal, and displayed in the bedrooms of little girls across America. And where did the profits go? To the relentless bottom feeders, who are willing to make a killing on anything, even a killing itself. America has turned into a culture of crazed sentimentalists who, to feed their need for romantic fantasy, seem to have distanced themselves from reality.

British philosopher Bertrand Russell defined sentimentality as, “Placing more importance on something than God does”. Think about it.

And on pages of newspapers everywhere, Barbaro’s adjectival army, sitting in front of their computers, surrounded by their dying horse trinkets, had their say:

“We love you Barbaro”

“Do horses go to heaven?” 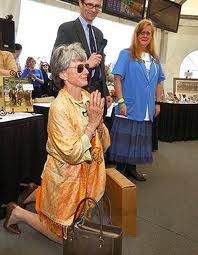 Does anyone wonder how many of the thoroughbred colts and fillies foaled each year in the breeding facilities of Kentucky, and Maryland, and California ever get to a race track? The answer is a miniscule percentage. Another equally miniscule percentage wind up as sport horses, to be ridden in equestrian competitions. So do any of you sentimentalist out there want to know what happens to the rest? They are bought by, what is known in the horse world as, “the killer trucks”, and shipped to Canada, where they are slaughtered, and then sent on to the kitchens of France, where horse meat sells at the local butcher shop for 10 Euros a pound.

But sentimental America wants to close its eyes to that kind of reality, and instead to gather in droves to sign petitions, demanding that the remains of the once proud horse know as Barbaro, be stuffed like Trigger, and put on display in Disneyworld. Maybe this crazed army of sentimentalists will then get what it always wanted, Barbaro, as a stuffed animal. 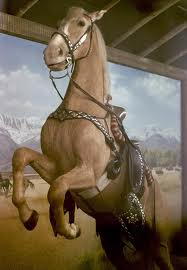 This entry was posted on January 29, 2011 by shauncostello. It was filed under Fiction and non-fiction from Shaun Costello and was tagged with Barbaro, Bertrand Russell, Canada, Equine Suffering, France, Horse Meat, Horse Racing, Ruffian, Shaun Costello, Shaun Costello's Blog, The Killer Trucks, The Preakness Stakes.