THE FIRST REVIEW OF “WILD ABOUT HARRY” 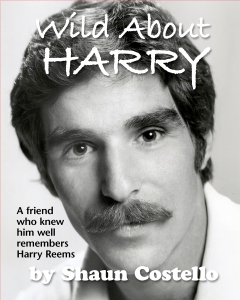 The first review of:

He made more than his fair share of films that are now recognised as classics but not always under the same name – he was ‘Kenneth Schwartz’ for FIONA ON FIRE but ‘Warren Evans’ for DRACULA EXOTICA, for example – and this prevented him from getting due recognition until relatively recently.

For notorious roughies FORCED ENTRY and WATERPOWER, he was ‘Helmuth Richler’ but ‘Amanda Barton’ made the sensitive PASSIONS OF CAROL. At Avon Productions he was ‘Russ Carlson’ and for a while he was even ‘Oscar Tripe’; plus there were numerous uncredited one-day-wonders.

In ONLY THE BEST, published at the dawn of the video era, critic Jim Holliday indicated that one person was behind some of these pseudonyms; but pre-internet it was pretty much impossible for even dedicated pornologists to crack the Costello code.

With the advent of the web, the IMDb and IAFD and dedicated discussion forums where smut-hounds could compare what they’d discovered, facts began to surface.

Then something occurred that every film historian dreams about; Shaun Costello himself joined the forums. He posted on IMDb. He corrected. He clarified…   And suddenly his incredible career came into sharp focus.

Not just those 66 films that he helmed but around the same number of appearances from 1971 to ’89 – and that doesn’t include loops – plus at least 50 films he produced and a similar number of writing credits. It’s a wonder he ever found time to sleep.

On the evidence of WILD ABOUT HARRY, his by turns hilarious and moving memoir about his friendship with Harry Reems, during the pre-DEEP THROAT days of Big Apple hard-core, sleep was often the last thing on his mind.

Whether he was editing into the early hours – the only way he could afford post-production facilities – or heroically carousing with his buddies – ‘the Three Musketeers of 42nd Street’ – those years in the late 60s and early 70s seem to have been one madcap adventure, where anything was possible. 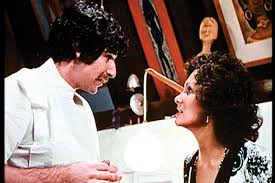 A voracious film fan, from art-house masters to grindhouse smut, Shaun absorbed everything. He fell into the pornographic loops business by happy accident, just as they were on the borderline of becoming legal, or at least tolerated, in the adult bookstores of the Deuce.

And he was there when a handsome, young, legit actor – still known by his birth name, Herb Streicher – made his debut in an explicit 8mm film destined for ‘under the counter’ sales.

(Assumed names were cast aside faster than underwear: Herb wouldn’t settle on Harry Reems for a couple of years, after he’d tried on ‘Tim Long’ among other aliases.)

It wasn’t just the start of a professional relationship – Shaun cast Herb/Harry as a disturbed Vietnam Vet in FORCED ENTRY, his first feature as director – it was the beginning of a deep friendship.

And now Shaun has published this memoir of those heady days – and that double entendre is very much intended – as a tribute to his buddy, who passed away in March of this year.

Anyone who knows the recipe for Automat Soup (a container of ketchup and hot water, if you’re asking – gourmets break some gratis crackers on top to simulate croutons) will probably already have a copy. 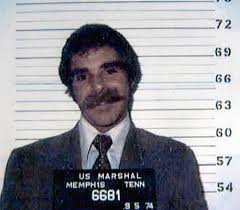 But what if you’re not a dedicated devotee of the Deuce and are wondering whether to purchase? Or what if you – horror – have to ask, ‘What’s the Deuce’? Well, let Mr Costello explain…

‘The Times Square subway station, my portal to the neighborhood, was an intense assault on the senses. A sudden, almost overwhelming surge of smells and filth hit you as the train doors slid open to the rush of urine, and cotton candy, and damp humanity, and hot dogs on their revolving spits, and vomit, and baked goods like crumb cakes and bran muffins and pretzels, and the garlicky pungent scent of Gyros slowly rotating, and everything suddenly interrupted by someone chasing a pick-pocket through outstretched hands asking for dimes, and a tidal swarm of the disenfranchised huddled in groups, trying to stay warm. And this entire sensory phantasmagoria was musically scored by the overmodulated sound of Kool and the Gang wailing “Jungle Boogie” from the cheap speakers over the door to the subterranean record store. And then the cold again as you climbed the stairs to the street, and there it was, “The Deuce”.’ (from WILD ABOUT HARRY © 2013 Shaun Costello)

From this vivid evocation of arriving at 42nd Street, you should immediately have discerned that our guide to all this decadence has a very neat turn of phrase indeed, which he puts to fine effect throughout the book.

It’s prose that encapsulates the sights, the sounds, the smells, the animal excitement of the city – and the only reason not to enjoy it is that it makes you break down and cry, lamenting the passing of such delightful debauchery. 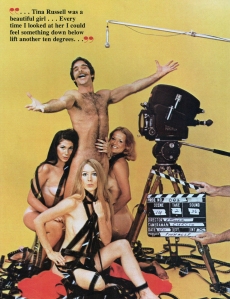 Herb being Harry, and enjoying himself

And he’s having fun all the way, along with his lifelong friend Jimmy and – of course – Harry, who is seemingly ever ready for an adventure. Such as one hallucinogen-fuelled romp which takes them from Times Square to the East Side via various apartments whose inhabitants are woken at unearthly hours, before disgorging them on a pitch-and-putt golf course by the beach… all described with a panache that matches Hunter S Thompson’s knack for conveying altered reality.

During this period, Shaun lost contact with his buddy, so he has to rely on the interviews that Harry made when he reappeared from anonymity (he’d become a real estate salesman in Colorado) in the wake of the documentary INSIDE DEEP THROAT, to describe what happened.

Initially I was worried that this could turn into a cut and paste job, but Costello has chosen and edited the quotes with great sensitivity.

It’s rather like that moment in a jazz number, when the star soloist comes forward. We’ve enjoyed Shaun talking about his friend and now we get hear Harry’s own voice.

And what a lovely voice it is, especially talking about his conversion to Christianity and the spiritual belief that saved him from alcoholism (with the aid of a 12 step programme).

This sort of tale could so easily be preachy. And how often have former porners turned on the business, their former friends, their whole past life, when they found God?

But Harry – or Herb – was clearly such a sweet guy – and his story of salvation comes over as so genuine – that even if you don’t believe yourself, you can’t help but feel glad that he found that faith because it saved his life.

And then there’s a coda: a meeting years later; a final phone call. It’s deeply touching and heartfelt. Shaun Costello has written as beautiful a tribute as anyone could imagine. Any quibbles? Just one. I was left ravenous for more of Shaun’s own autobiography. From his contributions to various forums, I know he has great tales to tell and that he tells them in an exceptionally entertaining manner.

Herb/Harry found love, God and happiness in the mountains of Utah

is available as an eBook