TRUMP’S MEDICAL TEAM – Who are they?

TRUMP’S DOCTORS SEEM TO HAVE A GLORIFIED VIEW OF THEMSELVES.
by Shaun Costello 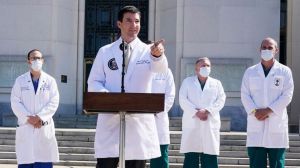 Who exactly is treating Trump’s Covid19?

Have you noticed how Trump’s medical team, when introducing themselves at news conferences, usually begin with, “First, I’d like to say how honored I am to be a part of this group of magnificent physicians”. Really? Are they? Have any of you checked? Well, I have: Let’s take Sean Conley, the leader of the pack. He got his bachelor’s from Notre Dame, a very good school. But it’s downhill from there. He’s not even an MD. He’s a DO. Which means he’s not a Doctor of Medicine, he’s an Osteopath. He got his Doctor of Osteopathy from the Philadelphia College of Osteopathy. Really? Then what? When you can’t make it in private practice, you join the Navy. Upon treating Trump for covid19, Conley took a crash course in LYING TO AMERICA. Conley then took what ever medical oath he might have taken, and traded it in for television screen time, as Trump’s surrogate liar. Maybe before his next news conference, this Osteopath should be given a Polygraph.