One film at a time

By the early Spring of 1971 I was still bogged down by the editing of Forced Entry, my first feature length film. I could successfully fake directing a movie, which is exactly what I had done, but dealing with the machinery of post production proved to be a difficult undertaking. The months were going by as I pretended to edit the film, terrified that, sooner or later, I would be discovered as the fraud I most certainly was. Meanwhile, there was no money coming in, so I had to resort back to porno-acting as a source of income.

Sex films were now being made with theatrical distribution in mind, and some very different people began to test the waters. In mid April I showed up at a five story brownstone in Manhattan’s fashionable East Seventies, to act in a feature

length sex film. The owner of the house was Richard De Combray, a semi-famous actor/photographer who did coffee table picture books of cities like Venice. Doug Collins and Avind Harum were the producers. Doug had been a film editor, and Avind, a six foot five, blond Norwegian, had been a

lead dancer with the Harkness Ballet. This was a far cry from the sleazy atmosphere I had experienced just a few years earlier. These guys had a concept. Shoot a film in one day. Edit in under a week, and get it to the marketplace in under two. They had a story with a beginning, a middle, and a surprise ending. They also knew where the money was, market wise. Jerry Gross, who had a company called Cinemation, was raking in record profits on a film he picked up called “Sweet Sweetback’s Baadasssss Song”, made by Melvin Van Peebles for almost nothing, and which was quickly becoming the biggest grosser in the history of independent films. Gross was looking to pick 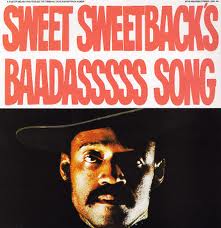 up a sex movie, and Doug Collins knew it. So Doug made his little movie for about five thousand dollars, and sold it to Gross two weeks later for Fifteen. These guys had a concept from day one. There was a lesson to be learned here.

In the Fall of that year, I got a call from Doug, who was flush from the success of having sold his first sex movie at a profit of 200%, and wanted to invest that money in a project so bizarre that he was convinced it would make him a fortune. He planned to produce a movie that would be called:

“AN AMERICAN IN BETHESDA”

He asked me if I would play the part of an amputee, who had

lost his leg in combat in Vietnam, and was recuperating at The Bethesda Naval Hospital, just outside Washington DC. Doug’s idea was to create a movie around the lives of Vietnam vets, who were under long term care at this facility, and the unusual entertainment provided for them by the Veteran’s Administration. He put casting notices in the trade 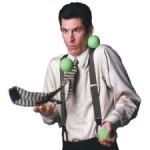 papers for Vaudeville performers, and they responded in the hundreds: singers, dancers, comedians, jugglers, fire eaters, ventriloquists, even an Adagio Dance Act called Patrick and Nadja who did a tasty Adam and Eve routine with a twelve foot python named Gladys. Doug and Avind’s idea

Now, this was 1971, when hallucinogenic pot sold for twenty dollars an once, and Doug certainly smoked more than his share, which was the only explanation I could come up with for how he could possibly think he could sell something like this. But, who was I to argue with a guy who made a 200% profit on his first movie, regardless of how insane this project seemed.

The entire film was shot at the old, abandoned AT&T soundstage in the Westbeth complex, on Bethune Street, on the extreme edge of Manhattan’s West Village. The Vaudeville

acts, none of whom were told that Doug and Avind planned on putting sex scenes in this epic, were shot separately, one right after the other, which took an entire, very long shooting day. The actors who had been hired to play the patients, Doctors and Nurses; myself, Jamie Gillis (his first film), Fred Perna (later Lincoln), Laura Cannon, and many others whose names I have forgotten, showed up on the

second shooting day which, as I recall, exceeded 24 hours. The shooting took so long, and Doug was so confident of turning cinematic absurdity into profits, that he only shot one sex scene, which involved me and Laura Cannon.

A few days later we shot the preposterous last scene, in which the amputee, played by myself and now nicely fitted with a new prosthetic leg, exits the Hospital using crutches, and is run over by a car while crossing the street. Doug and Avind hired an expensive Hollywood stunt man to do the scene, and shot it from many angles, over and over again, while I sat on a bench across the Street with my friend Harry Reems, both of us tripping on mescaline, watching me die again and again.

It took Doug a few months to cut this thing, and I went to a screening with Jamie Gillis and Bill Markle, who had been the cinematographer, and with whom I was now involved in another project. We could only shake our heads in disbelief. Doug had included all of the angles of the death scene in the final version, so that we see the amputee hit by the car about ten times, which is all scored to a song, written by Doug, the lyrics of which I remember as beginning with:

“A Man’s not supposed to cry,

While this movie was a hilarious adventure in absurd film making, I was absolutely convinced that it was unsellable which, unfortunately for Doug and Avind, turned out to be true. They spent about six months pounding the pavement, screening their cinematic oddity for distributor after distributor, until finally giving up, and shelving it.

Flash forward to mid 1974, when I got a call from Doug, whose name and latest misadventure were all over New York’s newspapers.  He told me his tale of woe over a few beers at Joe Allan’s, an actor’s hang-out in the Theater District. It seemed that Doug, who had become a partner in a Commodities Brokerage firm, had gotten himself into trouble selling something called commodities options. Buying futures on commodities like plywood, or cocoa, or soy beans was a common practice, but Doug took this to another level by selling options on these futures which, while not illegal at the time, was highly questionable. Evidently there was someone at the Commerce Department in Washington who set the price on chickens each week, and Doug had been told that this information could be bought for a price. So he borrowed from everyone he knew, and came up with ten thousand dollars which he stuffed into an envelope and passed to the appropriate person at Commerce, and bought a ton of options on chicken futures on behalf of all his customers. The shit hit the fan when the market opened, and the price of chickens that Doug had purchased for ten thousand dollars turned out to be bogus. He had done all the purchasing on margin, and when the call came he was caught short by a mile, his company lost their seat on the commodities exchange, and Doug was up on felony fraud charges, facing possible jail time. He was selling everything he owned to pay attorneys, and thought that maybe I might be interested in buying “An American in Bethesda”. Doug had heard that I had become quite successful producing ‘one-day-wonders’, which were cheaply made quickie sex features, and thought I might be able to add a few sex scenes, and convince my distributors to buy his fiasco as a sex film.

I told Doug that I would see what I could do, and convinced Teddy Kariofilis, the owner of Manhattan’s Capri Cinema, that this was a good idea which, of course, it wasn’t. Poor Doug. He was a nice guy who would forever be known as the man who was caught short on chickens. 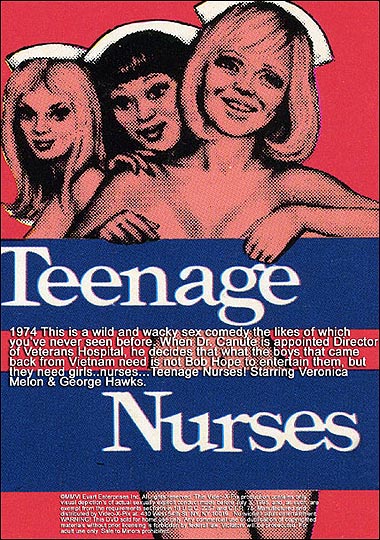 Renaming the film “Teenage Nurses” was Teddy’s idea. So, I added some sex scenes, and even a laugh track, which I thought was funny at the time, and “Teenage Nurses”, formerly “An American in Bethesda”, opened at the Capri Cinema sometime in the Spring of 1975. Al Goldstein’s scorching review in Screw Magazine featured a production still under which read the caption:

“Pornography loses its innocence, and succumbs to moral rot in this puker”.

Another flash-forward, this time to early 2010. After remaining in some unknown basement for 35 years, a tattered 16MM print of “Teenage Nurses” was found, and used as source material, from which a low quality DVD was struck. A friend in New York, who was aware of the story behind this bizarre project, sent me a copy. I think it’s important to include here my reaction to seeing this strange movie, 35 years after I talked Teddy Kariofilis into buying it. What follows, is a copy of the e-mail I sent to my friend in New York, describing my feelings, after watching it.

Yes, that’s me as Arthur Boynton BSF News with the Groucho nose and glasses. I added these scenes to Doug Collins original, blissful catastrophe to give the film some chaotic structure. And yes that’s me as the amputee patient, filmed four years earlier. The last scene, where I was run over by the car, was done with a highly paid stunt man. I sat there, with my friend Harry Reems, watching take after take of myself dying, while I was high on Mescaline, tripping my brains out. Boy, those were the days.

OK, I guess enough time has passed since I saw Teenage Nurses, I think it was Friday. Ultimately I was disturbed by it. It was like being locked in an unruly child’s untidy room. The chaos was unrelenting. There was nowhere to hide. It broke every rule, and then some. There was a mesmerizing quality about its dysfunctionality. Watching it exhausted me. The sex scenes that I added to Doug Collins’ original potpourri were strangely unappealing, the actors unattractive, the dialogue topsy-turvy. It was a runaway train of sight gags, and one-liners, without much continuity or cohesion. What surprised me, was that I obviously attempted to keep the additional footage I created, in order to give it a legitimate sex-film release, consistent with the mischief and mayhem of the original. As a sex film it was just God-awful. I doubt that much masturbation went on in the balcony of the Capri Cinema during this film’s run there. Not really fair to the audience. Very self-indulgent behavior on my part, in keeping with my behavior in general back then. Talking Teddy Kariofilis into putting his money into something ridiculous was one of my favorite endeavors – see “Passions of Carol”. So I was insensitive and unfair to the film’s audience, and manipulative and dishonest with the film’s backer. Where does this leave us? Locked in a messy room with a pile of broken toys. The amount of energy I expended, back then, on self-indulgence and manipulation, simply for my own amusement, startles me. Teenage Nurses is like a cinematic thalidomide baby.

Whether “Teenage Nurses” formerly “An American in Bethesda” is the strangest movie ever made is for someone else to decide. But, I have to admit that, while creating a little “moral rot” is deeply satisfying, being responsible for having produced this cinematic anomaly does make me a bit nervous.