This story is excerpted from my childhood memoir

THE LAST TIME I SAW JESUS

Promotion to the Fifth Grade at Our Lady Queen of Martyrs School produced no noticeable changes in my day-to-day life, other than having a new teacher, and being a year older. The school, the kids, and the neighborhood seemed to go on as before. I was sitting in a booth at the Sutton Hall Pharmacy, sipping cokes after school with Beth Neilsen, Soomi Esses, Kevin James, and that know-it-all weasel Richard O’Leary. I had no money so Beth generously offered to share her lemon coke with me. Beth was the smartest and prettiest girl in school and, for a reason totally beyond my comprehension, treated me like I was human. At this point in my little life puberty was still only a rumor. Boys and girls rarely socialized, and paid little attention to each other, but Beth was different. She always said hello when our paths crossed, and made small talk that I never attempted to avoid. 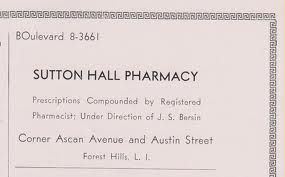 Anyway, probably as punishment for sins of past lifetimes, the four of us sat there listening to O’Leary’s insufferable diatribe on traitors in America. It seemed that President Eisenhower was a card carrying member of the communist party. So was J. Edgar Hoover. O’Leary knew this to be a fact because his father told him, and his father was always right. Not only that, but Douglas Mac Arthur, the hero of the Philippines in WWII, was now living in Moscow teaching the Russians how to destroy America in WWIII, which would begin in the Fall of 1956. “Real Americans”, claimed O’Leary, “knew about this stuff”.

Just before I was ready to kill myself, I looked out the window and saw two kids being chased down the Street by an old man who was swinging his cane at them. They stopped, turned, and shot him with their Weegee water pistols, and the chase resumed. Finally the old man gave up and headed for the front door of the drug store. This was Mr. Nocky, the neighborhood lunatic. No one knew where he came from or where he lived. He was just there, and was often the victim of the cruelty of children. As he passed our booth I spoke up, “Hello Mr. Nocky”. He stopped, scanning the occupants of our booth. “Sasay, sasay, it’s not nice to fool Mr. Nocky’ he replied, as I knew he would. “Just saying hello Mr. Nocky”. “Well, that’s different then. Sasay, sasay, Mr. Nocky went to the Staunton Military Academy, in the beautiful Shenandoah Valley of Virginia. Not everyone went to Staunton, but Mr. Nocky did. And Mr. Nocky always used a Trojan. There are many brands of rubbers, but science has proven Trojan to be the most effective”.  He wandered over to the counter mumbling, “Sasay, sasay” to himself, and by the time he took a stool his daily cup of tea was waiting for him.

Mr. Nocky’s interruption blessedly put the kibosh on O’Leary’s oration and, taking advantage of this event, the group happily disbanded. I lingered outside for a few minutes talking with Kevin James, who invited me to come over to his house the following Saturday, and then made my way home. The next day Kevin James was not in school. There was immediate speculation as to the cause of his absence. Mumps, measles, strep throat, flu, anything was possible. Grim and depressing as always, Vincent Averna was sure it was polio. Suddenly, Mother Superior appeared at the door to our classroom and 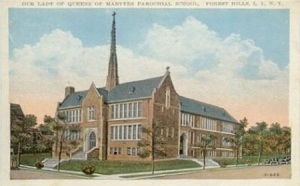 the kids jumped to their feet chirping in unison, “Good morning Mother Superior”. She addressed the class. “Children, you’ve probably noticed that Mr. James is absent this morning. It is my sad duty to inform you that last night his father was called to God’s bosom”. The whispers began:

“What does that mean?”

Mother Superior continued, “On Thursday Sister Innocent will lead this entire class over to the funeral home, where Mr. James will lie in repose. You will say a rosary for the salvation of his immortal soul”. And she left.

So on Thursday afternoon, Sister Innocent marched her flock, all washed and dressed for the occasion, the nine or ten blocks to the Fox Funeral Home.

The place was owned by the Baxter family whose sons, Noel and Wayne, I had gotten to know   playing basketball at the Community house. We were led into a large room with chairs arranged in rows facing the front where a large wooden casket sat on some kind of platform. The lid was open and, in the distance, you could see the pink, waxy looking face of Kevin’s dead father. Sister Innocent led the class in a rosary, after which we were to stand, in threes, at the side of the coffin, to view the body and pray that the soul of Mr. James would enjoy an eternity of happiness at the right side of God Almighty. Heaven was a very exclusive club. You had to be Catholic, and you had to be good, otherwise you spent eternity in an unpleasant alternative, roasting in the fires of hell. Protestants, Jews, Hindus, Moslems, Buddhists, regardless of their goodness, had no shot at salvation whatsoever, and were destined for the big barbecue. Heaven was a “Catholics only” venue. You had to be Protestant to be President, but you had to Catholic to rate heaven. Papal vengeance, I suppose.

When it was my turn to stand next to the coffin, I was totally spooked. I had never seen a dead guy before, and was both terrified and fascinated. His skin was waxy and translucent and, although I had no experience at viewing the deceased, I can honestly say that he looked very life-like. I wondered what would happen if he suddenly sat up and started talking. Sixty kids would probably pee in their pants. When our respects had been properly paid, Sister marched us all back to school, and we went home from there.

I stopped off at my friend Jimmy’s house to tell him about seeing the dead guy. It turned out that he had never seen one, but knew Wayne Baxter really well, and Wayne had once promised him that he would sneak him into the funeral home after hours and show him dead people. When confronted with his death-tour promise Baxter wanted a buck each for corpse viewing, which I thought was highway robbery, but Jimmy said he would lend me the dollar so we agreed. We rounded up Tommy Welstead and the Bullock twins, who agreed to the price, and the five of us were led by Wayne into the basement door of the funeral home.

The place was closed from five to seven so that the employees could eat dinner, so we were alone with the deceased. After walking us through all the viewing rooms, where waxy bodies were displayed in open coffins, Wayne took us downstairs where he said they did the dirty work. There was a large tiled room where three naked bodies were lying on metal tables. All were elderly, two men and one woman. Their eyes were closed, and their mouths were open, and they had rubber tubes sticking into holes in their skin. There was an overwhelming smell of chemicals, but the bodies themselves had no 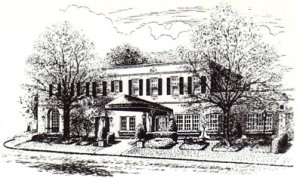 odor. Wayne told us that they were in the process of being embalmed, and that there wasn’t anything left inside them that could smell. Tommy Welstead started poking one of them with his finger, and Wayne shouted, “Hey, no touching”. Suddenly Stephen Bullock ran for the bathroom to puke his guts out. Wayne, still in tour guide mode, showed us the prep room, where bodies were put when they arrived, but before they were embalmed. The room was refrigerated and locked with a huge latch on the outside of the door, and smelled so badly that it didn’t seem like you could be in there more than thirty seconds without losing your lunch. Wayne told us that the bodies smelled awful before they were embalmed.

Our tour was now over and, out on the street, we parted company with Wayne. The five of us walked in silence for a few minutes before we realized that there were only four. Tommy was missing. Stephen suggested that he probably ran home to puke, and didn’t want any of us to know. It sounded reasonable and, along with Jimmy, I stopped by the Welstead house to tease him about throwing up, but his mother said she hadn’t seen him in a few hours. I suddenly had a terrible feeling that somehow we had left Tommy inside the funeral home. Mrs. Welstead let us use her phone, so Jimmy looked up Baxter in the directory, and got Wayne on the phone. He told him what had happened and Wayne agreed to meet us at the basement door to the funeral home right away. The three of us looked all over the place and there was no sign of Tommy. We wandered around the basement for a while and suddenly Wayne turned white as a sheet and said, “Oh Jesus, did we lock him in the prep room?” We approached the prep room door, the one with the huge latch that could only be opened from the outside. Wayne opened the enormous door, and there was Tommy Welstead, his skin all blue from the cold, and the whole front of his shirt covered with vomit, breathing heavily with his mouth wide open, and his eyes as big as quarters. He ran past us and out the basement door, leaving pukey footprints as he went. We looked inside the prep room, and most of the floor was covered with the last few meals that Tommy had eaten. What a mess. Wayne said we’d better clean this up before his father found it, and Jimmy turned to him and said, “You made five bucks. You clean it up”. So the two of us left our tour guide to clean up the mess. We didn’t talk much on the way home. Dead people. Very creepy.