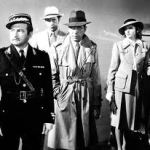 The ten best American films I can think of that

were produced by Hollywood’s studio system. 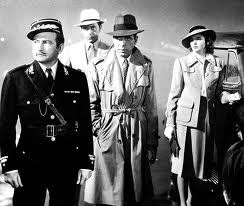 A moment here, to talk about criteria. My selection process was based on those films, whose existence depended on the creative conveyor belt of Hollywood’s film factories, that began with the Silents of the Twenties, and peaked with the well organized, and marvelous output of the Thirties and Forties. The major studios were run by hard nosed businessmen with names like Mayer, and Zanuck, and Warner, and Cohn; whose methods for getting a product to market varied little from their cousins back East, in New York’s Garment Center. Everyone who worked in movies back then was under contract; writers, directors, producers, scenic artists, technicians, and of course, movie stars. The production schedules were tight, and the objective was to get the maximum amount of product to the marketplace, with the minimum amount of time and cost. Scratch a Movie Mogul, and find a Garmento? Sure, why not – the system worked. And, every so often, the right elements fell into place, usually by happenstance, and resulted in memorable motion pictures. The appropriate writer for the script, the right actor for the part, a crew that knew its business, a savvy producer to crack a whip, and the right director, with the vision and stamina to see the project through. And the result was the everlasting language of movies, woven forever into the fabric of the American syllabus. Those lines that live forever: “Of all the gin joints, in all the world”………. “Pay no attention to that man behind the curtain”………..  “Take ‘em to Missouri, Matt”………. “Leave the gun. Take the cannoli’s”………… “I’m on toppa the world, Ma”………. “Frankly my dear, I don’t give a damn”………… “Badges? We don’ need no stinkin’ badges”……….“I coulda been a contender. I coulda been somebody”.  American films, produced through the Hollywood Studio System.

I struggled with this, and many of you will find fault with my choices but, for better or worse, here they are: 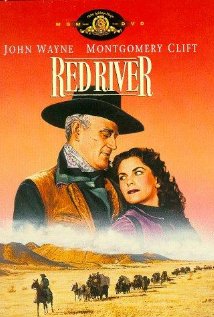 As American as it gets. Hawks’ memorable tapestry of the blazing of the Chisholm Trail. The cattle were in Texas, but the Rail Head was in Abilene Kansas. And driving a huge and ornery herd of

cattle, for the very first time, across the Red River, over mountain ranges, through hostile Indian territory, risking misadventure with nature and bands of rustlers, was no easy business.

Wayne almost believable. Lots of crusty, spicy cowpoke dialogue, that might be corny in the hands of another director, but Hawks pulls it off.

It’s dawn on the range, and the men and the cattle are ready. Hawks’ camera does a slow, minute-long, 360 pan across the faces of cowboy after cowboy, beginning and ending on Wayne, who looks to Montgomery Clift and finally say’s, “Take ‘em to Missouri, Matt”. Clift raises his hat

and whoops the first of many, and the next cowboy does the same, and in quick cuts now, face after face, whoop after whoop, until, finally driven by the drama of the moment, the music swells, and the herd begins to move. It’s one of the great moments in movie history and, if you haven’t experienced it – shame on you. 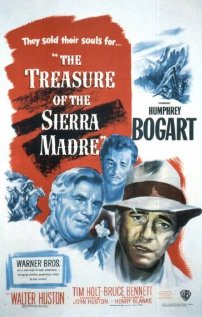 Greed and paranoia in the Mexican Mountains. Huston’s masterpiece, and an Oscar for his Dad. Huston wrote the part for

his father, Walter, to play. What gold does to men’s lives. Howard (Houston) foretells of the possibilities of sudden wealth turning men against each other, but Dobbs (Bogart) say’s not him. He’d take only what he needed, and not a bit more. And of course,

Absolutely perfect from beginning to end, and as good as movies get 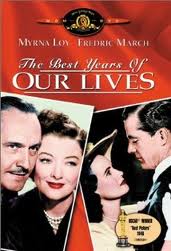 The War over, three men meet on the transport plane taking them home to Boone City. A middle-aged Army Sargeant (Fredric

March), a decorated Flyboy (Dana Andrews), and a Sailor with hooks for hands (Harold Russell – a real-life vet amputee, who gives a startlingly believable performance). This film was shot in the time which it depicts, and the language, which might seem corny

and dated now, is how people spoke back then. The right cast, particularly March and Myrna Loy, the right story, and a savvy director turn this into one of the real champs. Best moment: Dana Andrews in the bomber shell. 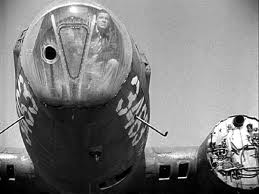 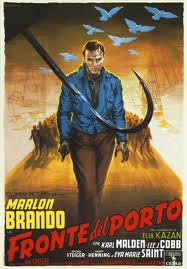 So, you have to ask yourself, “Were there really commies in

Hollywood, after WWII, and what message were they sending?” Here, Director Elia Kazan, ever embittered by the McCarthy-driven witch hunt that victimized him, certainly serves up a leftist theme, but who cares. Scorching drama, delivered by Brando’s ex pug, Malden’s stalwart Priest, and Cobb’s gangster brother, all delivering Budd Schulberg’s 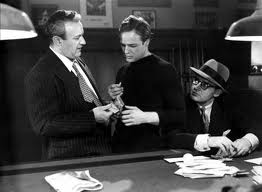 crisp, believable dialogue make this one memorable. Also great ensemble work by Kazan’s bit players, some of whom were ex prize fighters and looked it. Overlooked often, is Leonard Bernstein’s simple and haunting score, and Boris Kaufman’s all-to-real, black and white cinematography. If you’ve seen it, see it again. If you haven’t, what are you waiting for? 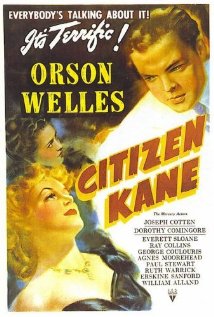 The one and only. Movies would never be the same again. The story goes, that it was Nelson Rockefeller (Just who did you think

“Rosebud” – what was it, anyway. From the opening Newsreel, to the screening room scene, to a life revealed, every moment dazzles. Innovations, one after the other – from Greg Toland’s mesmerizing lens, to the rapid fire editing, to Welles’ brilliant direction, to the debut of all those newbie’s from radio – it was all so new and fresh. The screenplay, by Welles and Herman Mankiewicz, has two camps; critic Pauline Kael whose

expository essay “Raising Kane”, suggests Manky to be the prime mover, with Welles making additions here and there. Peter Bogdanovich, whose response to Kael was his own essay, “Kane Mutiny”, published in Esquire, refuted Kael’s claims. Years later, it was revealed that Bogdanovich’s piece was actually penned by Welles. Who cares, really? The film’s the thing, and there’s just nothing like it. 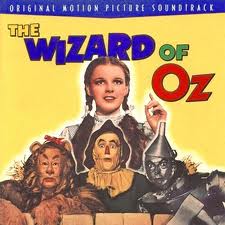 Well, because! Because of the wonderful things he does. I wanted to include a musical, and no other Hollywood Musical matches

Dorothy’s magical tornado-assisted journey from Kansas to Oz, and back again. Nothing even comes close. It’s as fresh and appealing to children today, as it was when it first opened seventy years ago. Seventy years – hard to imagine. Garland, and Bolger, and Lahr, and Haley, and Frank Morgan’s Wizard, and Magaret Hamilton’s Wicked Witchiness, and Billie Burke’s Glinda.  And all those Munchkins, who live

Somewhere, Over the Rainbow. It’s just all so perfect, and it made the world a better place. 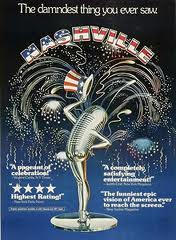 I’ll bet I surprised you with this one. Altman’s scathingly hilarious take on Country Music, and the shrine it lives in. The

word got out, Robert Altman was on location shooting some kind of musical, and he was letting the cast members write their own songs. Well, that’s about all it took for actors from Altman’s older films to start showing up on the set. And Altman wrote them in, playing themselves, and they improvised their scenes with other cast members. Julie 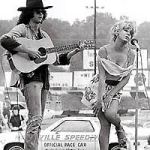 Christie and Elliot Gould were among them. It was a chaotically joyful atmosphere.

OK, during a political campaign in the city of Nashville, the story drifts lazily through the lives of several of its citizens – some musicians, some wannabe’s, and some just plain folks. The vignettes are so absorbing, and the music so great, that it doesn’t seem to matter that the movie seems to have no central theme – but it does. Incredible performances by an insane Barbara Harris, and far too many actors to name. Just about the time when you begin wondering

what this thing is all about (we’re now almost two hours into it with no apparent story in sight), all of the characters converge at the site of a political rally. And then it happens – someone we’ve known all along, unexpectedly pulls out a gun and starts shooting. And cast members start falling. And in the midst of chaos, the craziest member in the cast, Barbara Harris, a wannabe lounge singer with no voice, picks up the microphone and begins to sing, somehow calming the terrified onlookers. Nashville Is an eyeful and an earful, but most of all, it’s joyfully entertaining. 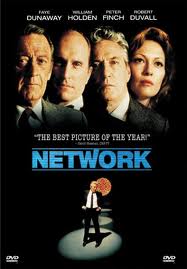 Howard Beale, former Mandarin of television, and currently the madman of the airwaves. Lumet’s crafty direction, pretty much letting his cast do their thing, comes in second here, to what may be the greatest screenplay ever written. Paddy Chayevsky’s brilliantly prophetic script foresaw the future of television. In 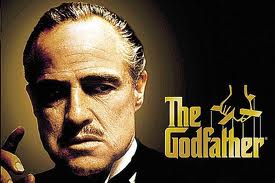 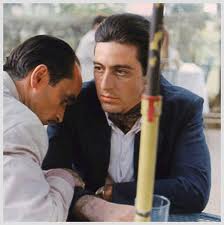 Ok, I know I’m cheating here, but I’m going to combine them as

one movie. I didn’t want the Godfather Saga taking up twenty percent of the list. Find forgiveness in your heart. Vito Corleone’s clan seems to take up more than its share of space in the American psyche. Part Two may be an even better movie than its predecessor. From Clemenza’s “Leave the gun, Take the cannoli’s”, to Hyman Roth’s “Michael,

we’re bigger than US Steel”, it’s a marvelous narrative of two generations of a Mafia crime family. Really, picture perfect in every way. Coppola’s all-seeing eye seems everywhere, in every detail, no matter how small. He brought the A-Team to this one, from Gordon Willis’ dark images to Nino Rota’s music. Splendid! 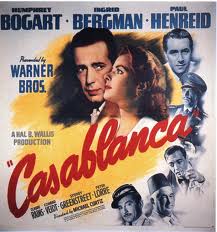 You must remember this. Hollywood’s greatest accident, and maybe the all-time most perfect script. Just a production number

on Jack Warner’s long list of propaganda projects for Washington, but somehow, everything fell into place. Bogart and Bergman, who seldom spoke to each other off-camera, and never struck up a friendship, came off as perhaps the most romantic couple in the history of movies. Warner’s stock company filled out the cast perfectly, and that song – As Time Goes By. Assigned to write the screenplay, totally by happenstance, were those happy go lucky Epstein twins, Julius

and Philip, who would pen perfection, much to their own surprise. From top to bottom, no one had any idea that this little propaganda vehicle would wind up to be one of Hollywood’s greatest classics.

But there was a problem. The edited film made no sense. Jack Warner hated it, and said it was unfixable. Editor Owen Marks sat there with Director Michael Curtiz trying every trick he could think of. It was the ending. Bogart sends Bergman off with Henreid to the waiting plane. Major Strasser shows up and is shot by Claude Raines, much to Bogey’s surprise. But it doesn’t seem to make any sense. Warner drags the Epstein boys off their tennis court and orders them into the editing room. When they see the ending they’re stunned. “What have you done to our script?”, they ask Curtiz and Marks. Julius Epstein tells Marks to reverse the order of two close-up reaction takes during the end of the scene. Voila, a classic is born. And the Epsteins return to their tennis game. The Fundamental things apply, as time goes by.