February 5, 2014 Associated Press. In Rome today, Cardinal Vincenzo Pantangelli, The Vatican’s Director of Information, made a startling announcement to the world’s gathered press. “Ina order to addressa the misconceptzione that homosexuale activity is conadoned ina the Holy Mother Churcha, and at the directa wishesa ofa Il Papa himself, I ama announcing a new polizia that willa take affecta froma this momento. We are calling thisa new polizia ‘NON CHIEDERE, NON CHIEDETE’. So any of you that hava any questiones, about a thisa sensitive subjecta, pleasa to remember, that any homosexuale activitiesa of any ordaineda personsa ina the Holy Mother Churcha comesa under thisa new polizia, ‘NON CHIEDERE, NON CHIEDETE’, Whicha translatesa in English asa ‘DON’T ASKA, DON’T ASKA’. Thatsa right, ‘DON’T ASKA, DON’T ASKA’. This only makes sensa, because for sure, ‘non abbiamo intenzione di dirvi merde’. Anda you can figure that outa for yourselvsa”. This announcement puzzled the correspondents gathered at the Vatican’s Press room, who were later informed by The Church’s translators that, “Non abbiamo intenzione di dirvi merde”, translates as, “We’re not going to tell you shit”. The American Ambassador to the Holy See refused comment.

This story is excerpted from the manuscript of my childhood memoir;

“The Last Time I Saw Jesus”

Children, like sharks with blood in the water, or wild dogs who smell fear, can spot weakness a mile away, and will bide their time until the moment is right

to pounce. Sister Lenore showed up one day at Our Lady Queen of Martyrs, and became our teacher. She replaced Sister Saint Gerald, who was ill and had to be sent to convalesce wherever nuns went to do that sort of thing. Nuns never talked about themselves so, other than being our teachers, having incredibly clean fingernails, wearing rimless spectacles, enjoying hitting children with inanimate objects, and seldom smiling, we knew little about them. We knew that their order, The Sisters of the Immaculate Conception, came from Scranton Pennsylvania, but that’s all. I’m not even sure how we knew that, but somehow we did. So when Sister Lenore showed up that morning, the occasion was ripe for supposition.

Maybe she had been a missionary in darkest Africa, and was laid low with jungle fever, to be sent back to the States as a teacher. Maybe she toiled for many

years in a convent dedicated to the glory of cleaning the toilets of the poor, and as a reward for always producing the cleanest bowl she was sent to

our wonderful Parish. Maybe she worked as the personal assistant to the Pope himself, right there in Rome, but was caught with her fingers in the poor box, and was sent to teach at our school as punishment for her sins. We’d never really know for sure, but it was fun to pretend.

Anyway, here she was, so we’d just have to make the best of it. She seemed nice enough. Certainly nicer than that cranky Sister Saint Gerald, who was

The exorcisms began when, one morning, we found

a Holy Water Fountain just inside the door to our classroom. Sister instructed us to dip our fingers in the sacred waters and cross ourselves before entering the classroom, a common practice when entering or leaving a church. She told us that little children have tiny demons inside them that cause bad behavior, and demons just could not abide the sacred, soul-cleansing waters. This level of demon control lasted for only a few weeks, before she began sprinkling Holy Water directly from a bottle onto the heads of the unruly little perps, whose behavioral irregularities were obviously a direct result of Satanic possession.

During playground conversations over the next few weeks among the core group of class troublemakers, of which I was certainly a part, we came to the conclusion that the woman was a fruitcake, and if pushed far enough, she was bound to crack. Since we knew that she was the only nun in the school who sprinkled water on misbehaving kids rather than swatting them with yardsticks, we figured it was safe to go on the attack.

up on the blackboard, demonic drawings left in her desk drawers, and the odd behavior of Jim Freeny, the class arch-criminal, whose whole body sometimes shook as a direct result of Satanic possession. For our new teacher, this was the beginning of the end. Sister would walk up and down the aisles spraying her students with Holy Water

chanting, “You’re possessed, possessed by devils, possessed by Satan, possessed, possessed. It started as a muffled giggle, but Jim Freeny started laughing and couldn’t seem to stop. The more he laughed, the wetter he became, as sister had singled him out as Satan’s host. She kept dousing him with the sacred fluids, and the wetter he got the louder he laughed, and the more she kept screaming at the devil to leave this child, until finally, frustrated to a point of holy rage, she cold-cocked Freeny with the Holy Water bottle.

So, Sister Lenore stood above Jim Freeny’s unconscious form, now lying in the aisle next to his desk, as fifty-nine little mouths silently hung open, stunned at what they had just witnessed, and wondering what would happen

next, and she began to scream. She screamed out the classroom door, and screamed down the stairwell, and screamed all the way back to the convent, intensely watched by fifty nine sets of little eyes pressed against the classroom windows. Freeny was taken to the hospital with a concussion, and never admitted whether he was really unconscious, or just pretending, a subject of discussion for years afterward. The next day someone saw Sister Lenore, suitcase in hand, being helped into a sedan with Pennsylvania license plates. She was never seen again. Maybe she should have stayed in Africa. Accidentally wondering into a pride of lions had to be safer than teaching fourth grade at Our Lady Queen of Martyrs. 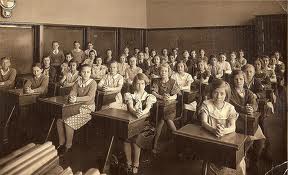