A LETTER TO LAURA HELEN MARKS 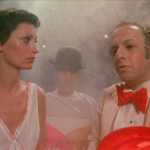 (I recently came across a letter I wrote to Laura Helen Marks, in response to some questions Helen asked about two films of mine, and about my old friend Jamie Gillis. She was doing research for her book:

I found the letter interesting, particularly my insights on Jamie, so I am posting it here on my Blog.)

A letter to Laura Helen Marks

I should preface any remarks by reminding you that, in the case of Dracula Exotica, I am not the author. Ken Schwartz, who I had known for several years, wrote the screenplay, lifting the story from the screenplay of “Love at First Bite”, which had done surprisingly good box office six months earlier. Schwartz vehemently denied any connection, even claimed he had never seen “Love at First Bite”, but the similarity was too extreme to be coincidental.

I am attaching a link to my Blog, that describes the production of Passions of Carol. Please feel free to lift any quotes that you might find useful.

In the case of Dracula Exotica, although I was not the author, I did make story changes and adapted the screenplay to my own sensibilities, as I saw fit. I read Bram Stoker’s Dracula when I was in High School, and it remained food for thought forever after.

I think I’ve seen most of the motion pictures adapted from Stoker’s novel, but most of them lost their way, the screen writers having no clue as to what Stoker was up to. The silent “Nosferatu” is probably the closest to the original. The whole vampire myth is dear to my heart. 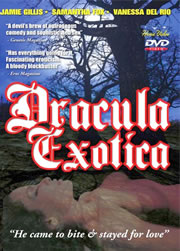 The silent Nosferatu was probably the closest to Stoker’s book.

Do I believe that Romanian bats bite tourists who then spread a plague of blood-lust throughout the civilized world, that only the crucifix, symbolizing the ultimate sacrifice that saved humanity from the fires of eternal agony, could put an end to? No, of course not. Do I believe that humanity, reduced to a state of pure passion, is capable of anything? Yep!

I worked on a documentary for Broadway producer David Merrick in Haiti in the 1980’s. I witnessed Voodoo rituals up in the hills. I met zombies. They do exist. Although, not in the common, fictionalized form. The local medicine man, or Ngana, gains power, and income, through terrorizing the indigenous proletariat. And what medicine man, or wizard, has not been, first and foremost, an alchemist. The Ngana administers a drug to his victim, that slows the heartbeat to almost nothing, and proclaims him dead.

Because the temporarily deceased is barely breathing, the oxygen in his coffin is sufficient to sustain him for three days, after which he is exhumed. And, to the horror of the locals, he has come back to life. Ngana takes life. Ngana gives life. Long live Ngana, who gladly accepts donations of chickens and goats, not to mention cash, from the terrified believers, to prevent their following in the zombie’s footsteps. Control through terror. The big lie. Hey, it worked for Hitler. 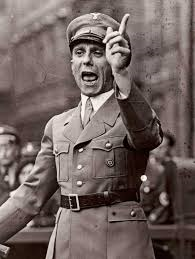 The inventor of “The Big Lie.”

Although the zombie is still alive, after his subterranean adventure, the lack of oxygen in the coffin invariably causes brain damage, and that far away look that reminds the locals to give generously when the Ngana passes the collection basket.

Zombies are about fear and superstitious belief, but Vampires are much more complicated, and like their Haitian cousins, also exist in superstitious belief. A myth, believed in passionately enough however, can become real, particularly if wrapped in the tendrils of sexuality. The Vampire is a very sexy boy. He is irresistible. He is the apocalyptic bite me/fuck me.

The Vampire is the Apocalyptic “Bite me/Fuck me”

And the welcome antidote to repressive, inhibited, Victorian sexual mores. The ruined maiden’s lament, “What could I do? He bit me. I was in his power. He willed me to do his bidding. I was helpless to resist his foul demands.” So, the girl got laid and it wasn’t her fault. A violation of her carotid artery, followed by an eternity of sexual conflagration and moldy coffins. Unless, of course, there’s the intervention of a stake, or a silver bullet.

Passions of Carol is another story altogether. But playing with Vicorian mores by layering them into blatantly sexual realities becomes contrapuntally delicious. This was my first screenplay, and while writing it, I realized that the closer I stuck to the original, the funnier and more satisfying the movie would be. Sexually repressed Victorian England is the fertile crescent of sexual deviance. (See the movie “The Ruling Class” – the world’s first S&M Musical, starring Peter O’Toole)

The last question – Yes it was my idea. Somehow including the inability to ejaculate to the many inconveniences (blood drinking, infanticide, late hours, dirty finger nails, etc.) suffered by the living dead seemed only fitting.

Read the attached and quote at will. I hope this helps.

First of all, you are not bugging me in the slightest, Laura. I support what you’re doing, and I’m happy to give you any information that might be helpful. OK, you’ve read the piece on Drac, and you’re probably aware that Jamie and I were close friends for many years, sharing many a late night adventure, prowling Manhattan’s dark canyons, looking for, and often finding, the shit. You’re familiar with the films I made back then, and you should be aware that I seldom made a film without Jamie. He was reliable, attractive, and on film sets, where most of your time was spent waiting for all of the elements to be in sync, allowing you to get a shot off, Jamie was fun to have around. He kept the cast and crew amused with funny songs and stories, and the females in the cast found him seductive and passionate to work with.

That said, what was Jamie’s attraction? He was a good looking guy, but looks alone don’t seduce, except in the extremely shallow. He had a substantial penis that needed little encouragement to stiffen, but penis size alone, even if it’s always hard, is not the answer. He was intelligent, engaging, and curious about everything, which are attractive traits, but intelligence, while the ultimate aphrodisiac, is not the answer either. So, lets put them all together. He was good looking, had a handsome and active member, was passionate and entertaining, and engagingly intelligent – a pretty handsome package. But there was something else, something beyond all these positive elements, something few people understood. Jamie was dangerous.

And it was this danger that lurked somewhere deep in his psyche that, when added to the aforementioned,  made women swoon. Although he seldom acted out, the possibility of an eruption of passion, whether caused by anger or frustration, was always present. And that possibility, even in its dormant stage, made him irresistible to women.

If Dracula’s appeal was bite me/fuck me, Jamie’s was scare me/fuck me. Long before I was offered the directing job on Dracula Exotica, I was aware of Jamie’s Vampire-like qualities. It was something we talked about many times.

Even as a teen, there was a danger to Jamie Gillis.

Something he was aware of, and nurtured. Like Dracula, Jamie Gillis was dangerous. No slam bam thank you Mam, he. A girl who took him home took a risk. And risk is very, very sexy.

I hope this helps,