A couple of kids from the Bronx dance their way through the depression.

My mother and Uncle Tommy were born in the Jewish/Irish Tremont section of the Bronx – Tommy in 1917, and his younger sister Catherine, two years later. Their parents, Nan, and Black Jack Dowling made a living of sorts on the Vaudeville stage as 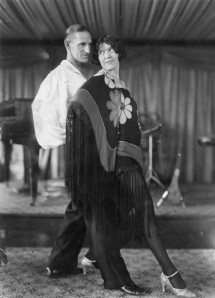 a dance act. But New York was where you played once you had made a name for yourself, and the Dancing Dowlings were far from being headliners. So, once my mother was old enough to walk, they picked up stakes and headed for Norfolk Virginia, a hub in the Southern Vaudeville circuit, where, shamelessly billing themselves as New York’s dancing sensations, it would be easier to get bookings. Norfolk was the venue of choice for another reason as well – it was home port to one of the United States Navy’s largest installations, employing over seventy five thousand Naval personnel, many of whom, when pay day rolled around, wasted no time losing

their hard-earned pay in the myriad of floating crap games and poker sessions that so often seemed to find men in uniform, whenever they had money in their pockets. My grandfather, Black Jack Dowling, when not booked to entertain Vaudeville audiences with his dancing feet, was more than happy to swindle recently paid sailors out of their cash with his practiced slight of hand. Wearing a stolen sailor suit, my grandfather, a predator with portfolio, armed with marked cards and loaded dice, rode the trains into and out of Norfolk, systematically separating the sailors from their pay, often just one step ahead of the local Sherriff, and occasionally that Sherriff’s guest in the local jail house.

Trained by their parents in the art of stage craft, Tom and Sis, now incorporated into The Dancing Dowlings, dazzled all who saw them with their high stepping and showmanship – they were naturals. With the kids carrying the show, the family act seemed to stay booked, and performed throughout the Southern Vaudeville Circuit on playbills with Fanny Brice, Buck and Bubbles, Jack Benny, Burns and Allen, Eddie Cantor, Al Jolson, and just about everyone who toured back then. But success couldn’t keep a card sharp like my grandfather out of regular incarceration for his nefarious railroad hijinks, and his absences became more frequent, until finally, he disappeared altogether. The act, unbookable without its patriarch, made the journey back to the Bronx, in search of employment for my grandmother, and education for her kids.

While still in High School, Tom and Sis continued to do what they did best, and they danced and danced, until people began to take notice. They starred in school productions, and spent all their spare time at a famous Bronx jazz club called the Club Fordham, where they entertained the musicians by improvising dance routines to any kind of music. Though not employed by The Club Fordham, they were encouraged by the

club’s owner Maurice Reidy, and performed their dance routines until they became crowd favorites. There was a buzz about them now – who were these kids? Reporters began to make the trek up to the Bronx, to watch, and to write about those kids at the Club Fordham. Photo shoots for magazines followed – ‘how to’

spreads with Tom and Sis demonstrating the latest dance craze for a dance-crazy generation of readers. Using the photographs from one of these sessions, the editorial staff at Ladies Home Journal hired an illustrator to create a likeness of ‘the kids’ for the cover of the August 1938 edition. So there they were, Tom and Sis Dowling, a couple of depression era Bronx kids, right there on the cover of a national magazine, doing their thing.

Within a year they had made the seamless transition from The Club Fordham, to Manhattan’s Stork Club, where they became favorites

of the owner, Walter Winchell, who both promoted and protected them. Now, this was the era of the ‘Big Bands’, and band leaders often hired dancers to demonstrate the latest dance trends to their music, for an ever-eager public. Winchell had mentioned Tom and Sis to his friend Horace Heidt, one of the era’s biggest band leaders, and, after seeing them dance up a storm at the Stork Club, Heidt offered them a contract to perform with his band, “Horace Heidt’s Musical Knights”, one of the

biggest bands of that decade. The gig with Heidt was followed by

gainful employment, dancing with Tommy Dorsey’s Orchestra, and Benny Goodman, as well. So now ‘the kids’ were getting paid to do what, until then, they had done for free.

In between performances with big bands, they would return to the Stork Club, where they had become audience favorites, until that fateful night in 1939, when Darryl Zanuck and Bill Goetz happened to see them dance, and

offered Tom and Sis an invitation to come to Hollywood as contract players for Twentieth Century Fox. Their Bronx days behind them, ‘the kids’, cheered on by the gang from the Club Fordham, boarded the train for Hollywood, and the next chapter of their lives.