“If a potential political opponent scares you, blame them for every disaster in the book. Some of it is bound to stick.”

The philosophy of Karl Rove 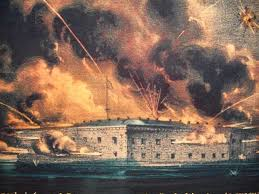 1861…The Federal Garrison at Fort Sumter, South Carolina was fired upon by Confederate Militia, which began the American Civil War. The Secretary of State was William Henry Seward. Was Seward blamed for the Civil War? Hardly. 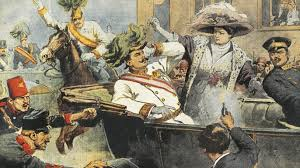 1914…Arch Duke Ferdinand of Austria was assassinated by a Serbian nationalist in Sarajevo, which began World War One. The Secretary of State was Robert Lansing. Was Lansing blamed for World War One? Hardly.

1975…In April of that year, the last Americans were evacuated from our Embassy in Saigon. America had lost the war. The Secretary of State was Henry Kissinger. Was Kissinger blamed for losing the Vietnam War? Hardly. 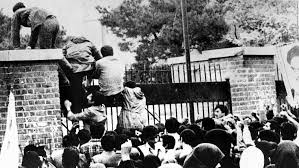 1979…The American Embassy in Tehran was overrun by Muslim extremists. 52 Americans were held hostage for 444 days. The Secretary of State was Cyrus Vance. Was Vance blamed for the Hostage Crisis? Hardly.

1983…The American Marine Barracks in Beirut was bombed by Muslim terrorists, killing 241 U.S. Marines. The Secretary of State was George Schultz. Was Schultz blamed for the bombing? Hardly. 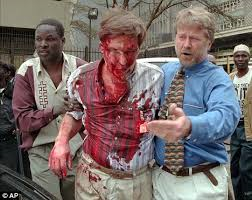 1998…The American Embassy in Nairobi was bombed by al Qaeda terrorists, killing 224, including 12 Americans. The Secretary of State was Madeleine Albright. Was Albright blamed for the bombing? Hardly. 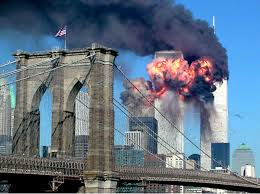 2001…On September 11th, al Qaeda terrorists attacked the World Trade Center and The Pentagon. 2,996 innocent people lost their lives. The Secretary of State was Colin Powell. Was Powell blamed for the 9/11 attacks? Hardly.

2012…On September 11th, a date that was hardly a coincidence, Muslim extremists attacked the American Consulate in Benghazi, Libya. Four Americans, including Ambassador Chris Stevens, lost their lives. The Secretary of State was Hillary Clinton. Was Clinton blamed for the Benghazi attack? Absolutely, and by every opportunistic, right wing conspiracy theorist on the planet. All the previous disasters listed above took place in another era. Before amoral right wing gangsters like Dick Cheney and Karl Rove would redefine political tactics forever by perfecting the art of mud-slinging to a degree unheard of in American politics. Nixon’s dirty tricks teams were minor league compared to Cheney and Rove.

In 2003, the CIA sent Ambassador Joseph Wilson to Niger, to substantiate the statement made by President George Bush in a State of the Union Address, that Saddam Hussein had purchased uranium from Africa. The Bush administration was desperately trying to justify its plans to invade Iraq, and there was no evidence of any of the weapons of mass destruction that Bush and Cheney had been peddling to the press, and to Congress. Wilson found no evidence to support Bush’s claims of the African/Uranium transaction. Cheney, Rove and Scooter Libby all tried to persuade Wilson to fudge his report, which

he refused to do. The White House upped the ante, and began threatening to ruin Wilson unless he lied to Congress. Wilson still refused. Wilson’s wife, Valerie Plame, was a CIA covert operative. When Cheney found out, he met with Rove and Libby and they hatched a plan to leak Plame’s CIA identity to the press through right wing columnist Art Novak.

Novak outed Plame’s CIA identity in his column. Bush’s CIA Director, George Tenet, was ordered to fire Plame, which he did. Plame’s covert networks were rolled up all over the Middle East. No one knows how many of her agents were assassinated as a result, but there must have been many.

Wilson made enough noise to get Congress to have a Special Prosecutor appointed. To save themselves from the embarrassment of being involved in any of this, Cheney and Rove threw Scooter Libby under the bus. Libby was ordered to fall on his sword. Revealing the identity of a covert CIA operative is a felony. Libby was found guilty of Obstruction of Justice, and two counts of Perjury. He was sentenced to pay $250,000 in fines and thirty months in federal prison. The sentence was, of course, commuted by Bush.

Let’s return to 2012, and the Benghazi affair. It was well known that Hillary Clinton intended to retire from her post as Secretary of State by the end of that year. She loomed large as a potential Presidential candidate in 2016. Polling data told the RNC that she was a 500 pound gorilla that they could not defeat. She enjoyed enormous popularity. When Benghazi happened, Cheney and Rove swung into action. A Congressional investigation was held to determine who was to blame for the deaths of the four Americans.

Secretary Clinton appeared before the committee.

Hillary Clinton, still Secretary of State, appeared before the committee and the innuendoes began – subtle at first, then pretty blatant. Cheney and Rove met with key Republican congressmen. If they couldn’t beat Hillary in an election, they would defeat her in the court of public opinion. Four Americans were dead, and it must be Hillary’s fault. Karl Rove studied at the school of Joseph Goebbels, who had all but invented the Big Lie Theory. If you lie loud enough and often enough, sooner or later, people would begin to believe you. So, Congressman Trey Gowdy’s preposterous Benghazi Committee began its assault on Hillary Clinton. It lasted four years and cost American tax payers a fortune, and when it was over, the final report absolved Hillary Clinton of any blame for anything. But the damage had been done. The televised committee accused Clinton of so many offenses, so many times, that some of the mud began to stick. The RNC even arranged to have the mother of one of the Benghazi victims speak at last week’s Republican Convention, where she blamed Hillary Clinton for the death of her son. Either they paid this poor woman to accuse Clinton, or promised her something she needed, or the poor woman is completely delusional. The families of the other three victims told a totally different story.

Goebbels all but invented the ‘Big Lie Theory.”

So, Cheney and Rove applied Goebbels’ Big Lie theory to the 500 pound gorilla, and cut her down to size. Polls are showing a neck and neck race in key battle ground states, between Donald Trump and Hillary Clinton. The Big Lie theory enabled Hitler to rise to power in 1933, and to stay there until one hundred million people lost their lives in six years of horrific carnage. And the Big Lie theory could play a key role in the unthinkable – that Donald Trump, a misogynist, racist, and tyrannical buffoon, could become President of The United States. 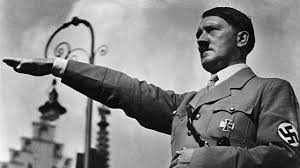 The “Big Lie Theory” enabled Hitler to rise to power in 1933.

That Donald Trump, a misogynist, racist and tyrannical buffoon, could become President of the United States.

HEY, HILLARY HATERS – WHY EXACTLY DO YOU HATE HER?

HEY, HILLARY HATERS – WHY EXACTLY DO YOU HATE HER? 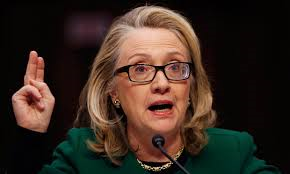 You hate her, don’t you. But do you know why?

I’ll bet ninety percent of you don’t really know. I voted for Bernie in my state’s primary, but Hillary will be the candidate, and I will whole-heartedly support her. You call her a liar. Just what exactly has she lied about? Come on now, what? I’m not asking you to quote some neocon Fox News smear meister. I’m asking what you actually know to be true. Not what you heard, what you know. And please, back up your opinions with facts. You say you don’t trust her. Why is that? What specifically has she done to merit lack of trust? Be specific now, what? Her husband is a philanderer. She chose to stand by him, regardless. Is that her great sin? Since Bill Clinton’s first term as President, the right wing smear machine has actively attempted to tarnish the credibility of the Clinton family. Remember Whitewater? The investigation went on year after year, at the taxpayer’s expense. And the result? Nothing. Remember Ken Starr, the Special Prosecutor, who refused to relent, and year after year, he pushed onward in his politically motivated campaign to smear the Clintons. Seven years, and seventy million taxpayer dollars later, what did Starr find? Nothing. The right wing’s negative propaganda campaign has never stopped. 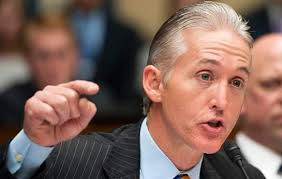 Is Gowdy looking for a Cabinet post, should Trump win the election?

It goes on even today with Trey Gowdy’s preposterous, expensive and politically motivated Benghazi committee. Like Starr, Trey Gowdy was relentless in his inquisition to blame the Secretary of State for a tragic event that took place six thousand miles from her office. Four brave Americans tragically died, and the Republicans attempted to make political hay out of it. How shameful. Is Gowdy looking for a cabinet post should Trump get elected? Two years and $7,100,000 of tax payer dollars. And what did their recently released report find? Nothing.

And today, Donald Trump calls Hillary a liar, and a cheat, and even a criminal. And no one asks Mr. Trump to justify these accusations with facts. What has she lied about? How has she cheated? What crime exactly has she committed? But the repetition of these accusations, that began in 1992, and continues today – twenty four years later, has taken its toll on how America see’s Hillary Clinton. 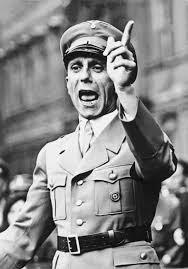 Goebbels knew a thing or two about propaganda.

Those accusations, that began in the fertile and evil mind of Carl Rove, a man like Goebbels, who believes that if you repeated a lie often enough, you could convince anybody of anything. And after twenty four years of accusation after accusation, even intelligent people begin to wonder – Those pesky Clintons, they’re always up to something. Propaganda is an effective political tool. Goebbels knew it. And so did Rove.

Bill Clinton lied to the American people about a blow job in a hallway. But those same intelligent people who seem to have been convinced by the tonnage of politically motivated negative propaganda, have forgotten that he lied to Hillary too. She was crushed by it, and it almost ended their marriage. But she chose to stand by him. 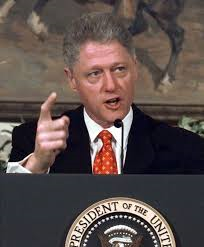 I did not have sex with that woman, Monica Lewinsky.

I find Bill Clinton to be charming and likeable, but I absolutely do not trust him. His recent clandestine meeting with Loretta Lynch aboard her plane was the arrogant act of a man who feels so empowered that he thinks he can get away with anything. His action cast aspersions on Lynch, who I’m quite sure was totally surprised to see him, and Hillary who must bear the brunt, once more, for the actions of her husband. And unlike her slick hubby, Hillary’s just not that likeable. But does lack of likeability disqualify her from being President of the United States?

So, step up to the plate, folks. Gimme whatcha got. Why are you a Hillary hater? Be specific, and back it up with facts, not innuendo.

“I call her what she is – Criminal Hillary. Cause that’s what she is, folks. No doubt about it. She’s a liar, and a criminal. And did I tell you, she cheats. That’s right, folks.”