A creature of habit.

I was awakened about 3AM by the light. The kitchen lights were on. Had I left them on before going to sleep? I got up to reconnoiter. The office lights were on as well, and the computer. What the fuck? I could never have gone to bed with everything on, but I was too tired to care. I turned everything off and went back to sleep.

Jazzbo begins his morning assault on my blissful unconsciousness at approximately 5AM. He begins with subtle murmurs, and gradually steps up the decibel level and physicality of his attack, until a few minutes before six when, while sitting squarely on my chest, the biting begins. He knows this is effective because it works every morning. I sit up on the edge of the bed and, after a series of head butts on my legs, we settle in to some head scratching, back petting, and tail stroking. OK, I’m up now. I turn on the light, grope for my flip flops, and mosey toward the kitchen, with Jazzbo weaving between my legs at every step.

The routine is always the same. I turn on the lights in the office, then the computer. Next is the kitchen, and making coffee – but wait…..not this morning. Something’s wrong. On the counter, next to the coffee maker is my cup – the one I use every morning. There’s coffee residue on the bottom. It’s been used. The coffee maker is filled with cold coffee. I always wash it after it’s done its work. And Jazzbo’s milk snack bowl is on the counter with some milk still sitting on the bottom. What is happening? Then it dawns on me. The lights at 3AM. At some point in the middle of the night I must have awakened, thinking it was 6AM. It’s just as dark here at six as at three. And I began my morning routine of turning on the lights, the computer, and the coffee maker. I even drank a cup of coffee. And I gave Jazzbo his milk snack. I have no memory whatsoever of doing any of this. Was I sleep walking? Did I have a psychotic episode? Is this early Alzheimers? I have no idea what triggered this event, or any recollection of Jazzbo’s participation. He was probably too freaked out by my sleep walking to join in.

After I’ve poured the water into the coffee maker, Jazzbo attacks the empty sink, lapping up what water he can find. This is disgusting, and I tell him so every morning, but he’s a creature of habit, and his sink fun is an integral part of his early routine. Next, I measure some coffee into the machine, and turn it on. Then the geezer pills – five of them. Jazzbo helps by trying to head butt the pill container out of my hands and onto the floor. He’s sometimes successful, sometimes not. Next, the ‘Where is it’ game begins; and Jazzbo, knowing what come next, becomes agitated, and begins pacing back and forth on the counter. I take the container of cat treats out of the cabinet, and head toward the bedroom. Halfway there I begin the shake the little bag and I hear ka thump – ka thump, as Jazzbo descends from the counter to the floor by way of a small table I placed there for his convenience. (After all, he’s twelve) I sit down in a chair and count out four treats. These are given to him individually, accompanied by embarrassing ‘yum yum’ sounds. Then I count out six more, which I place in front of him on the floor.

While Jazzbo’s gobbling up his treats and the coffee maker is finishing its work, I walk to the office to check email. I then click on the New York Times’ web site, and head back to the kitchen for my first cup. Jazzbo’s already sitting on the counter, waiting anxiously for his milk snack. I pour myself a cup, and take the milk container out of the fridge. Jazzbo becomes highly agitated, attempting to knock the container out of my hands. I take his bowl out of the cabinet and pour him some. Then off to the office to read all the news that fits.

This has been our morning routine for many years. But I guess it’s all different now, given that I have obviously lost my mind and become a rabid sleep frolicker. Maybe we have a poltergeist. No, that would be too easy. I’m just nuts now. That must be it. Why did this happen? I’m open to any suggestions. Something must have caused this to happen, but what? Could I be suffering from Trump Anxiety? Maybe I’m not alone. Could America become so Trumpatized that we are turning into a nation of sleep walkers? Maybe, tomorrow morning, after I succumb to Jazzbo’s early morning assault, I will awaken to find that it’s all been a dream. That Hillary had won be a large margin and that all was well and good in the world. Or would that be too easy? 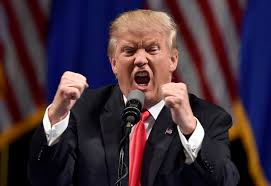 Trump Anxiety is the enemy of a good night’s sleep.

This entry was posted on February 11, 2017 by shauncostello. It was filed under Fiction and non-fiction from Shaun Costello, Uncategorized and was tagged with Donald Trump, My cat Jazzbo, My morning Routine, Shaun Costello, Sleep Walking, Trump Anxiety, Trumpatized.